skip to main | skip to sidebar

Sometimes a Man Must Feel Ill at Ease 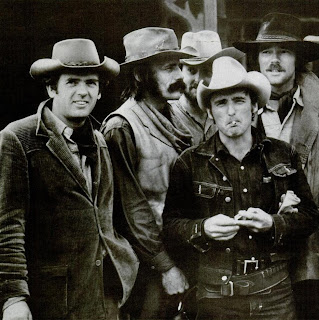 The Chemical Times Try to Tangle His Mind

Song: "Some Other Road"

Fifty songs into Corduroy Mountain, and the time has come to recognize the genesis record for this pursuit of forgotten albums and unknown musicians. Lost in a row of dollar-bin overflow at Vinyl Solution in 2002 was Pott. County Pork & Bean Band, a name so ridiculous and captivating that I fell prey to its immediate charm. The hirstute band members on the cover—four in all—are holding court in a pig pen, the earth as dark as the pigs' coarse hair. They are clothed in denim and plaids, cowboy hippies stuck in their tiny Kansas farm community. But a flip of the cover proves more revealing and tantalizing; Jim Richardson's photography captured the local kids gathering at the local auditorium for a Saturday night of music, dancing and other shenanigans among the discarded cans of Colorado Kool-Aid. 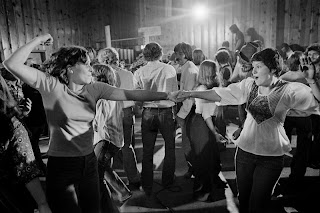 I wanted into this world, circa 1975, where the success of a weekend night could be quantified by the number of hoots, hollers, and handclaps. Until Doc Brown makes his DeLorean available for sale, Pott. County Pork & Bean Band's Spreadin' It album will have to serve as my auditory time machine. Mixed between their set of covers—songs by Merle Haggard, Peter Rowan, and David Bromberg—were two original compositions, including "Some Other Road." The back cover features the subtitle "Alive in Belvue (pop. 176)." Listening to this song I imagine that population increasing by one.

I Want to Love You

Walk onto the porch at Corduroy Mountain. Yesterday's clothes, a western shirt and Levi's bellbottoms, feel better today. An arid breeze pushes through wild grass and causes the unbuttoned shirt to flutter. Draw a deep pull from the jar of sweet tea, pulling the sugary residue from your upper lip with the lower. The barn and its jacket of fading paint rests at the bottom of the slope. That ol' mother can still host an all-night Saturday dance. The tandem Schwinn stands propped against the side of the house. Meandering across the scrub field like an unfurled lariat is the dirt road, its soft curves forever a siren call. A gentle moan announces the arrival of the One on the porch. She's wearing an embroidered tunic and a calico skirt. Swoon. Step down to the ground and hear the crunch of gravel under boot. A nod toward the bicycle is invitation enough.

He's My High and Holy Lover

The small couch, shoved against the wall, cradled my tired, sprawling body. Steel-gray clouds drew their heavy curtain across the afternoon sky. A steady percussion of rain drops collided against the window; a cyclical drop echoed in the chimney like an amplified cowbell. I struggled from my prone position to put Diane Kolby's record on the turntable. The needle slipped into the groove, and an audible dawn swept from the speakers and filled the room. Was this an LP or a choir of sweet-voiced birds? Soon Diane began singing in tongues, her joy palpable in the nonsensical words. When the song reached its ecstatic peak, I looked outside. A phalanx of nourishing God rays streamed through the storm clouds.

The Sweets of the World

Song: "How Can You Live Without Love?"

Yacht rock as a genre designation has only one flaw—the concept identifies the millionaire musicians, not its blue-collar audience. Who would have been listening to Steely Dan, the Doobie Brothers, and Loggins and Messina and buying their records in copious quantities? The florists, chefs, and secretaries of 1970s America. For these nubile fans, a yacht would have been a dream docked beyond the fence of an exclusive marina. Water wouldn't have been a dominion to own, but rather savor as a refuge from the week's monotony. These individuals would have turned to a more affordable means of aquatic transportation—the catamaran. Much like the boogie van on land and the hang glider in the sky, the catamaran created enough of a craze in the 1970s that clubs formed wherever an inviting body of water and a sweet breeze could be found. The men would wear OP cord shorts and the women bikini tops and Daisy Dukes. After the day's rigorous sailing had come to a satisfactory end, the randy participants would unfurl blankets on the shore and watch the pink and violent sunset as they cuddled and sipped wine. Perhaps their transistor radio would be dialed to the one local station cool enough to be playing "How Can You Live Without Love?" And all would be righteous in their world.

Is It Pretty? It's Pretty

Album: ...and Then Came Bubba

Your resume couldn't have been more impeccable: the acerbic talking political blues; a recording contract with Columbia records and production by Bob Johnston; a credited spot on Bob Dylan's underrated Self Portrait album. Bubba Fowler, you could have been the new Dylan. Hell, even your initials are almost the same. Only one problem. Any new Dylan's best song mustn't be an instrumental, even when the bayou romp is so funky that Jerry Reed may have turned his head and yipped, "Son!" But thanks for applying.

I'm Going to Roam No More

Someone named RomeoSidVicious wrote an entry at the Nine Bullets blog about funeral songs. As in what songs you would have played at your funeral. A morbid playlist to be sure, but being someone who plans to micromanage the set list at his wedding, selecting the soundtrack for my great sendoff doesn't seem unreasonable.

The Nine Bullets post directed readers to choose five songs, and the first four I chose were:

I knew the fifth song would be "Going Home," which has an entire backstory that can be read here. Annie Haslam's bombastic performance is my favorite, but I want to share another version I found during a recent rummaging of dollar bins. Jeanie Greene, wife of Marlin Greene, used "Going Home" as the caboose track to her lone LP, and this rendition befits the album's substantial Muscle Shoals roots.
Posted by Peter at 1:34 AM 2 comments:

These songs are posted for historical and research purposes. They'll remain up until someone asks to take them down.

Here's What You Missed